Edward Carpenter is best known today for his writings, and for his courageously honest gay lifestyle.

Carpenter is rarely thought of as a musician or composer, yet a search through the Carpenter Archive in Sheffield, or a quick glance through the bibliography, will show that Carpenter left behind a quantity of both published and unpublished music.

This web-page attempts to bring Carpenter's music to wider notice, initially as downloadable soundfiles, and hopefully later in downloadable sheet music for your own performance.

If you are interested in Carpenter's music please get in touch.

In Chapter One of "My Days and Dreams" (Carpenter's autobiography) you will find the folowing paragraph:

As I say, it is probably a common experience that mere school teaching does not leave a very deep impression. Probably a good deal really is learned - but these are the more indirect things which slip into the background or foundation of the mind and character and so pass comparatively unobserved. Only three or four subjects of interest stand out in my memory as belonging to my school-days, and these all lay outside school proper. The earliest of these was music. At the age of ten I desired mightily to learn the piano; but music was not considered appropriate for a boy - besides there were six sisters who had to be taught, poor things, whether they liked it or not - and so my appearance on the music stool was treated rather as an intrusion, and I was generally hustled off again forthwith. However I got my way by playing late of an evening, when they were all upstairs in the drawing-room; I never had any regular teaching, but my mother took pity on me and taught me my notes; and from that time I stumbled through the "Marche des Croates" and the "Nun's Prayer" till at last I emerged on the far borderland of Beethoven's Sonatas. This hour of piano practice to myself was for a long time one of the chief events of my day. Indeed, it is curious, but I took to composing, or attempting to compose, music before ever I thought of composing or attempting to compose poetry. Of course with a juvenile mind, and no musical training, nor even a particularly keen ear, my compositions were of no value, and I hardly ever troubled to write them out; still the habit of making up pianoforte pieces, and the love of doing so, continued all my life, and forced its way out from time to time. It is only in quite late years that, with more technical knowledge, I have written some of these down - perhaps twelve or twenty in all - and even occasionally thought of printing them.

Those same compositions can be found in the Carpenter Collection in Sheffield, in Carpenter's handwriting, with the inscription: 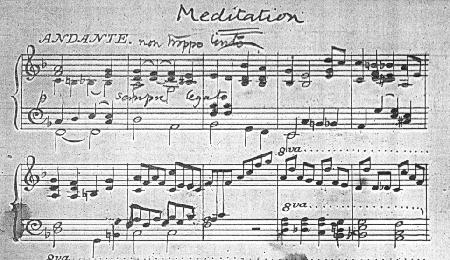 In 1888 Carpenter published a book entitled:

Chants of Labour - A Song Book of the People.

The following pieces are those songs in the book which have music composed by Carpenter.

Additionally, the following song, although not in the same anthology, was published by Carpenter in 1908

My thanks to Alan Rowlands whe recorded these pieces at Yewbank, Cumbria.

On a personal note, as the website editor and long time Carpenter fan, I was delighted to find that these piano pieces had real skill and sensitivity in their composition, and are well worth hearing. There is one peice in particular, Meditation, which I liked so much that it was played when my partner David and I held our Service of Blessing and Covenant in June 2001.

Return to Top of Page